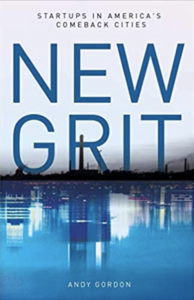 “If you are a fan of comebacks and underdogs, look no further. These cities are not just hoping for a resurgence. They know it’s coming, and you should too,” says Gordon.

The book focuses on industrial cities like Detroit, St.  Louis, and Baltimore that used to be economic powerhouses but have been struggling the past few decades due to deindustrialization. Through the book, Gordon argues that not only are these cities seeing a resurgence through an influx of startups, but that this revitalization would yield nationwide economic, social, and well-being benefits.

“What do these cities have in common? They’re all second- or third-tier cities that, while having their own distinct character, are not nearly as relevant on a national or international level as cities such as New York, San Francisco, Los Angeles, Washington, Chicago, or a couple dozen others anyone you ask could rattle off,” writes Gordon in his book.

Gordon says that the book will be appealing to a wide audience, including people who are looking for optimism in deindustrialized U.S. cities as well as people interested in the general startup community.

Gordon has written three articles on the book including excerpts from some of the book’s passages for those interested in learning more: